We had a one day brief set a week or so back in which we teamed up with a graphics illustrator to create a page based on a question regarding the college to help advertise the courses. Our question revolved around the reasons why you should pick Stockport college to study your HE course.
On the day we ran into a number of issues - we attempted several different attempts in which to illustrate our cause but only came up with the best method near the end - we then had complications in the computer suite when one of the computers wouldn't load PS and the printer wouldn't respond so the piece we showed during the talk was very weak.
We luckily had a few days to work on it and we managed to make it look how we originally intended it to. I was paired with two Graphic Designers who handled the text and layout. 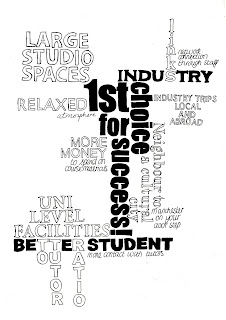 I then incorporated the illustrations we had previously discussed along with a few other various things to fill the gaps - and here it is - hopefully - finished! 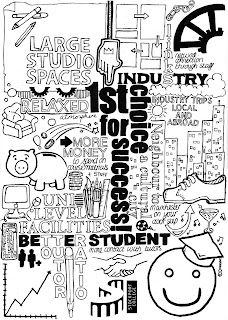