I wish I had done this 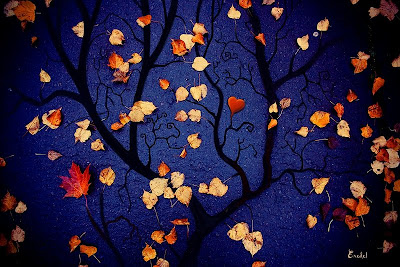 One of the requirements of my blog was to choose ‘one piece of artwork I wished I had personally done’. I kept putting it off – not because I didn’t want to do it – but for the fact that I couldn’t fathom how I was going to select ‘one’ image from all the amazing pieces of work I had come across during my brief time studying to be an illustrator. I have covered so many influential, gorgeous and inspiring pieces of art and artists alike. Then I recalled, while gathering imagery for recap when interviewing a small selection of artists, I had came across a particular image where I had outright thought ‘I really wish I’d thought of doing this’ and the urge to attempt it was so strong. The image in question is ‘Fall of the leaf’ by Eredel Victor, I find it really ironic that, out of all the detailed and complex pieces saved within my archive, this is the piece I chose.

Eredel Victor combines photography with illustration in a way that I wholly admire; his work touches on the child-like imagination that some people lose – seeing reality but manipulating it, turning it into magical landscape, a canvas full of possibilities and imaginary friends. Victor is able to expertly merge the lines of reality and fantasy to create a piece so strong that you generally have to do a double take to work out how it’s possible. An example of this would be another of my close favourites ‘Ulitka’, where Victor has managed to match the highlights, texture and form of the snail perfectly making it appear real. His talent with a camera also enforces the finished effect of his imagery, each piece is well presented, framed and edited to project the mood and strong sense of atmosphere originally intended.

‘Fall of the Leaf’ is a fairly simplistic piece as far as Victor’s work generally goes, in other works he has shown the skill of matching reflection, water and shadow imitation. This piece focuses on original elements such as the fallen leaves scattered on the concrete during autumn – a fairly regular and common sight for most people, but Victor has worked it into an imaginative piece giving the whole image a completely new outlook. He has digitally created a tree with plenty of swirly, crooked branches rising upwards from the bottom of the frame – catching the leaves and giving them purpose again. He manages to draw round each leaf to make it appear as if it was on a layer above his drawing. He has then included a small heart – protruding from one of the branches – just off centre of the image. This opens up so many potential meanings, thoughts and expressions contained within the image – an autumn lover, a preference for the season or leaves, a love that has grown bare and is losing its hold on reality, or an enduring love that remains attached to the branches despite natures course. He has included a slight shadow behind the heart that allows it to blend into the array of surrounding leaves – the deep red tone also becomes one with the contrasted colours of the image.

Victor uses his editing knowledge to increase the blue tones of the concrete creating a complimentary base for the subject matter – he includes a fairly heavy vignette effect to frame the image and highlight the centre. It works effectively against the red, yellow and blue tones and seals the atmosphere of early sunsets and hastening darkness that autumn brings about it. Victor's pieces always have their own uniquely specific colour chart to follow, each representing whichever mood or atmosphere he is attempting to illustrate or capture. He illustrates the little things we miss, the moods we ignore and the dreams we forget.
I find the image really pleasing to look at, the vibrant shades and imaginative yet simple idea behind it make it a very powerful and effective piece of work to behold.