I had an event 2 weeks back [12-15th April] in Birmingham - I made three costumes for it but two of them were fairly simplistic mainly because my third was this:

The biggest pain were all the details - the bracelets/bangles and more specifically the belt. 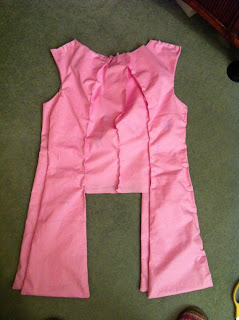 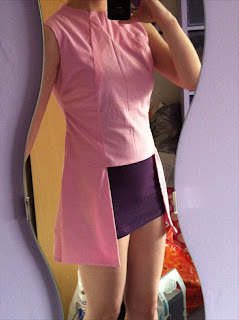 I used the same dress pattern I used to make my previous entry [Zelda dress] but ended up modifying it to such a degree I might as well had made it from scratch. I was required to move the front two seams over as originally they came up and ended in the arm hole. As shown I moved them to match the reference ending in the collar. I modified the collar making it higer and closer and obviously modified the bottom completely - shortening and changing the lengths to match. The dress unzips at the back hidden by the wig. 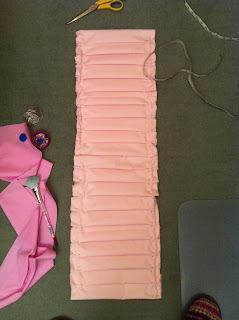 Despite sewing and making costumes for nearly over three years now I have yet to actually ever pleat anything - so this was a definite first for me! It didn't end up as badly as I originally had feared it might and I managed to keep the pleats fairly even. The amount of fabric it required however took me off guard a little and I had to sew two different pieces together to make it long enough. 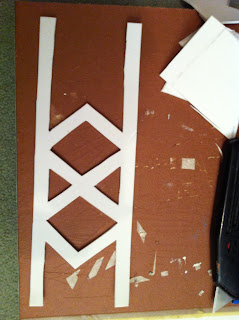 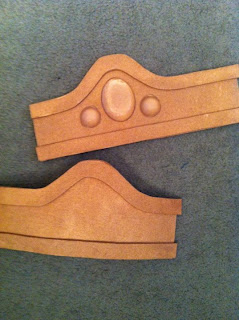 The armbands were made from craft foam. I cut the shapes using a scalpel and then sprayed them gold with spray paint. I sewed/glued 4 poppet clips to fasten each one around my arm.

The gems were made using resin casting again. The costume uses a total of 35 gems - a friend of mine graciously offered to cast all the gems for me as she had previously made the costume herself and still had the moulds so I lucky to save time with that. I received them clear like shown in the above photo so I used sand paper to smoothen the edges and glass paints to colour them their retrospective shade of red or green and glued foil behind each gem before attaching it into place. 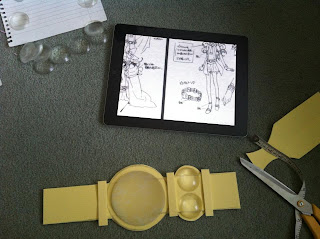 The belt was made up of several layers of craft foam to both enforce it and keep it accurate. Again it was cut/glued and sprayed gold before adding the gems. I made it fasten together under the large centre gem to hide the join.
The belt was the part I was most dreading but it ended up not being as hard as it was time consuming.
The golden collar at the top of the dress was made in the same way - using craft foam layers and spray paint. It fastens together at the back and clips onto the dress to allow easy removable. 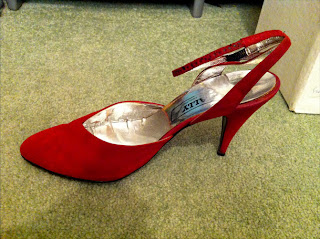 I bought some base heels from ebay - they originally had a string of diamonds along the upper strap which I had to unpick by hand. I then added craft foam at the toe end and attached the gems when they were dry. 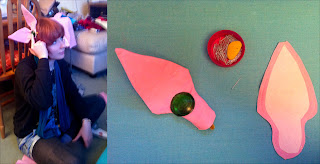 The hair flower required two attempts - my first ended up the wrong shape - I created each petal separately out of material and ironed on interfacing to give it a firm shape before sewing it up. I then folded and pushed a pipe cleaner into each petal to give it more flexibility before sewing them all together in the centre. I then used a dark pink sharpie pen to create the darker tone around the middle of the flower and attached the gem. I also added some wire with beads threaded on it around the middle for decoration.
I made the white 'scarf' piece that hangs from the flower out of some white cotton - I drew the design on using sharpie again. 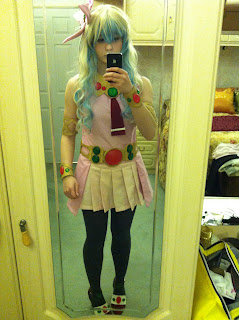 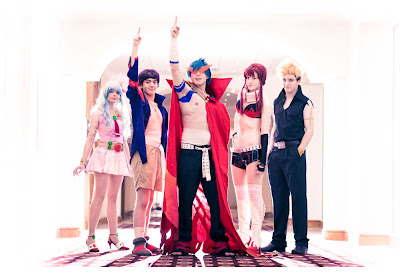 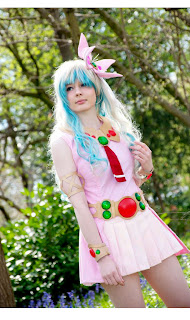 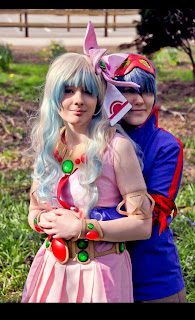 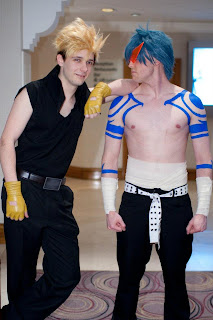 The morning that we wore the costumes I spent 2 hours hand painting the tattoo's onto our 'kamina' [The character with blue hair] Unfortunately I haven't managed to find a photo of his back which features a large flame design but here's an example of his front.

We used a mixture of pax and blue acrylic paint to stop the paint from rubbing off - it literally requires it's own bottle of solution remover to get off. Then coated him in talcum powder to seal the design. He slept in the tattoo's as he was re wearing the costume the next morning for an event - I only had to do some very minor touch ups the following morning to roughly 2 spots on his arm where a piece barely the size of a 50p piece had flaked off.