Posting some progress from my current brief!
I decided to attempt to enter the Macmillan Book Prize, with a bit of an odd story all the same but I hope it works out. I've been working on a colouring style for one of my characters, the sun sprite. I got a new tablet over Christmas so I've been finding colouring and lining so much easier. 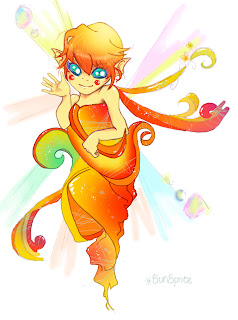 The example above is my progress so far - I'm completely relining the piece as the examples shown above the lining is blotchy and thick, whereas this looks much smoother and more natural. Whether this is because the pen I used to line the image originally bled to much I'm not sure yet. 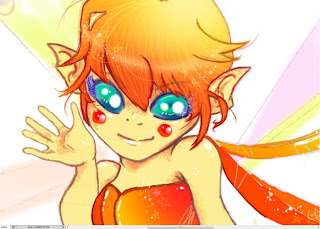 -- and a close up - I'm thinking of layering a few more filters to maybe soften the shades a tad when the lining is finished. Despite this being a fairly lengthy process I feel I can afford to take the time to shade my characters effectively as the nature of my story calls for backgrounds mostly involving clouds and air space therefore the majority of the backgrounds shouldn't take long nor would they need to mimic such excessive detail.