I finally finished it! I've uploaded a teeny, limited colour and dithered version of it in giff form above as the original file is too large for blogspot to host. I made several variants but due to the time it takes for rendering and such I'll only be showing them in img form below.

As you can probably guess it's based around the Evil Queen and her poisoned apple. I used the frame design with some amendments and the texture paper from my print examples. I had originally experimented with illustrations of the characters themselves blinking and moving/changing but when I came to deciding on my final outcome I realised what I really wanted to make was something that actually 'moved' and had life.

I also felt that my illustrative skill in terms of drawing the characters was lacking and thus decided to take a more abstract route - aka focusing on the hands and key element [the apple] - which surprisingly has gone fairly well considering hands are the bane of my illustration career.

I'm very keen to do a few more like this - to cover the other two frames, but since each panel is drawn individually it's a very lengthy process so I'm lucky enough to actually have managed to finish this one in time for the hand in!

During my earlier giff experiments I found flash frustrating to use as it was difficult to line panels up and modify the document settings, this could have simply been down to my lack of knowledge with the programe regardless I decided to try out photoshop's animation tools.
I got the grasp through much trail and error and have definitely found myself preferring it to flash. The timeline system and layers make it much easier to line things up - it also saves the time of transferring the images between the two programes as I generally put my imagery together through photoshop to begin with.

In terms of the animation I decided to take a very old school approach and started out by filming myself rotating the apple and going through several different poses. I then manually saved the frames and split them into blocks.

I picked my favourite out of the ones gathered and enlarged the frames. I picked a sequence that rotated the apple within the hand and then further polished the skin as this produced some interesting hand movements. I removed the colour and added contrast to the frames to create the series of reference imagery used to compile the animation. 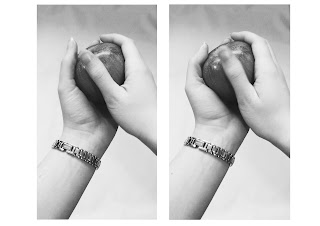 From these frames I drew the lineart for the animation, scanned the frames in and animated it using PS timeline. 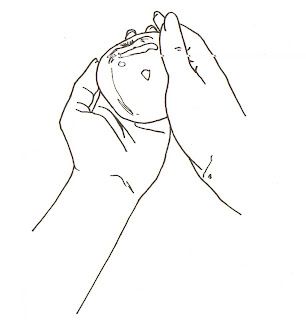 Once I was happy with how it looked and had gained a basic understanding of the programe I added my boarder design and a background and slotted the animation frames inbetween them. 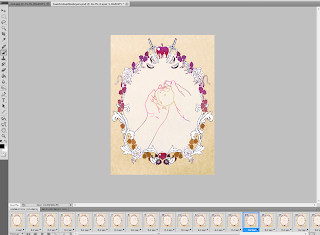 I created a practise piece that used the lineart with overlaid colour effects, once this was finished I took the original lineart frames and painted them using watercolour and wax effect. These were then rescanned in and processed. I then replaced the frames and worked with the timing and positioning to get my finished product.
For the amount of work involved the animation itself is disappointingly short but I have become more accustomed with the working method now and could probably achieve a must faster result. It does make me appreciate full length animated films a whole lot more though! I'd love to do more with this method and will possibly aim to have some others by the time my exhibition swings round.