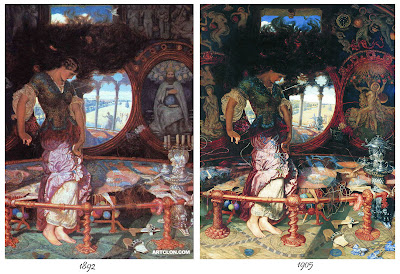 "She left the web, she left the loom,
She made three paces through the room,
She saw the water-lily bloom,
She saw the helmet and the plume,
She look'd down to Camelot.
Out flew the web and floated wide;
The mirror crack'd from side to side;
'The curse is come upon me,' cried
The Lady of Shalott."

'The Lady of Shalott' was originally an English ballad by Alfred, Lord Tennyson loosely based around medieval sources such as the Arthurian legend of Elaine of Astolat. Much like several others of his earlier poems - 'Queen Guinevere' and 'Sir Lancelot' he enjoyed Medieval folklore.
The poem itself has been interpreted in many ways; art critics have suggested it was how Tennyson viewed society - at a distance much like The Lady forced to view the world from the mirror he also had a filtered perception of the world. Feminists have concluded the poem  revolves around the believed station of a Victorian woman and how she is denied to leave her designated area lest punishment be inflicted.

'The Lady of Shalott' was Hunts final painting due to receding eyesight, the final version was completed with the aid of his assistants. Originally himself and Dante Gabriel Rossetti were approached by Tennyson to illustrate the poem for the Moxon edition of his works. Hunt became fascinated with the tale and painted The Lady caught up within the threads of her tapestry to highlight the estranged life she led, he remained obsessed with the composition and returned to it throughout his life until the final painting was completed in 1905.

Email ThisBlogThis!Share to TwitterShare to FacebookShare to Pinterest
Labels: research and debates